Managed funds operate in a similar way. However, these publicly-offered unit trusts often have many more than ten unit holders.

Also, rather than a trustee, there is a responsible entity to oversee the fund’s assets and operations. We will explore managed funds in more detail in the Investments module.

Let’s say the unit trust earned the income shown in the first table opposite for the year, which totals $14,000. Each of the ten unit holders will usually receive a proportional amount of income according to their unit holding, or 10% each in this case as shown in the second table, being a total of $1,400.

The $1,400 is added to the individual’s other income to calculate the total assessable income, although it may be adjusted for imputation credits if the dividends were fully franked (in this case an additional $171 each if they were from a public company) and reduced for capital gains that were held for more than 12 months ($150 reduction).

*Note if the unit holder is a super fund or individual, and the asset was held for more than one year, a discount in the taxable capital gains may be available. Imputation or franking credits may also flow through to the beneficiaries and be added to assessable income. 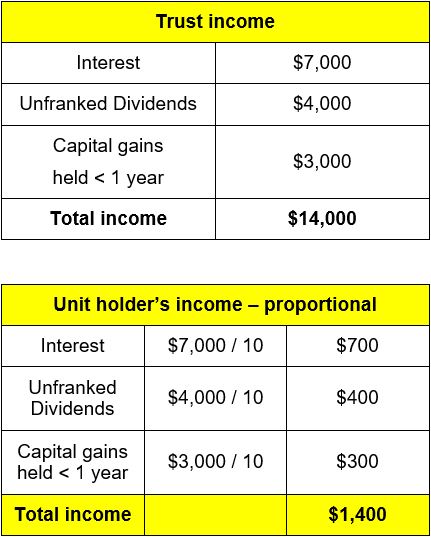