An exercise on super tax

You’ll see on the opposite page the taxable income for the super fund. Note there were no deductions for expenses.

You will see that the two changes are:

The bottom table shows the tax calculation for the super fund. The franking credits received by the super fund, are added to assessable income but also reduce the amount of tax payable by way of the imputation credit (tax offset).

The tax rate in the pension (drawdown) phase of superannuation is currently 0%. If the fund was paying a pension and received the same income, excluding the super contributions, the tax payable would be zero.

Whilst any income withdrawn from pension phase for a member aged 60 and above is completely tax-free, tax may be payable by an individual under age 60 (or from an untaxed scheme, such as a government super fund).  The taxable proportion of income withdrawn by a member aged under 60 will form part of the members assessable income and taxed at their marginal tax rate.  However, the member may be eligible for a pension tax offset of 15%. 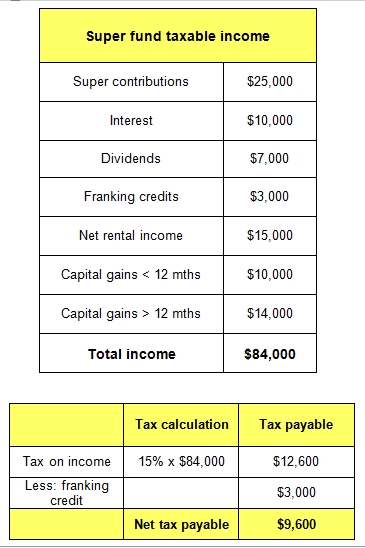